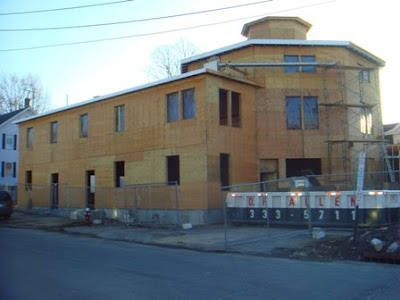 Joseph Lovaglio with Elite Northshore Realty which represents the building, recently said “there will be very unique apartments in the octagon shaped area.” Present plans are to make six apartments available, with two 2 bedroom units, two 1 bedroom units, and two studios or one large 1 bedroom.

Work to reconstruct the octagon-shaped cupola on top of the roof took place just last week. This architectural detail which had been present in photographs through the 1920s, by the 1960s had disappeared. Using historic archival photos, Architect Lou Baldino and contractors responsible for the rehabilitation were able to reconstruct this lost detail.

Ellen Roché, President of the Oyster Bay Main Street Association, commented on how exciting return of the cupola has been. “This feature adds a wonderful grace note to West Main Street, and reinforces the historic character of this important building and the whole downtown area.”

Luigi Lancia, project foreman, on a recent tour showed how great efforts are being taken to preserve as much architectural material as possible. Where beams and portions of the structure had been compromised, the original rough-cut lumber was used to twin or strengthen these areas.

The project team explored the possibility of retaining the wood siding. Unfortunately due to weather and poor maintenance for many years, this material was suffering dry rot and had been compromised to such a point that it was not practical to save. Efforts were made to find siding that matched the previous siding in profile and shape. 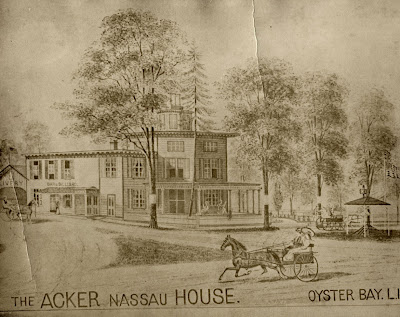 Circa 1871 photo showing the Acker-Nassau House.
In 1887 Phillip and Mary Lavelle bought the business and renamed it the Octagon Hotel. When Phillip died, Mary took over operations and made many modern improvements that brought patrons from miles around. A central heating system was installed in 1889 and a power generating plant providing Oyster Bay’s first electric lighting was installed in 1890.

The building gained added significance in 1899 when Theodore Roosevelt’s secretary maintained a one-room office believed to have been on the second floor. Roosevelt had been elected governor in 1898 and began serving January 1899. When this office became too small, his staff moved to a larger space in the Oyster Bay Bank Building.

One notable guest was German Ambassador Baron Speck von Sternburg was the first foreign representative to be presented outside of the White House. The Secret Service were also reputed to have stayed at the Octagon Hotel, including in 1902 when “the hotel was overcrowded with Secret Service men, reporters, and politicians” according to an article in the New York Times.

Oyster Bay entered the 20th century under a new owner, Charles Davenport, who saw his customer base decline as newer hotels in the village provided competition. After 10 years he sold the building to Edward Fisher who transformed it into Oyster Bay’s first Ford automobile dealership. Automotive businesses occupied the building for much of the remainder of the 20th century.

Rehabilitation Efforts
Bevola Realty Corp. purchased the property in 2007 with the goal to restore it. They were assisted in these efforts by the Oyster Bay Main Street Association, and a coalition of community groups interested in preservation. The Oyster Bay Preservation Roundtable included members from the Oyster Bay Historical Society, Raynham Hall Museum, the Oyster Bay Railroad Museum, the Society for Preservation of Long Island Antiquities, and Save the Jewel by the Bay.

Main Street and the coalition were able to secure over $16,000 to commission studies necessary to assist with preservation. The Gerry Charitable Trust of Roslyn gave the initial gift of $10,000, and another $2,000 came from the Daniel K. Thorne Intervention Fund with the Northeast Office of the National Trust for Historic Preservation. 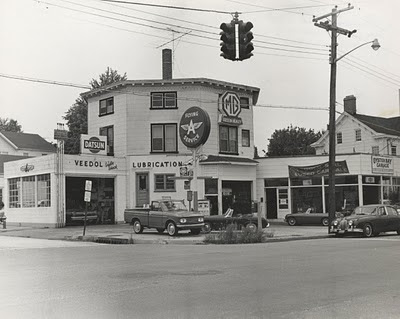 Circa 1965 photo showing the cupola removed.
These efforts culminated in the summer of 2009, when plans were agreed upon, and rehabilitation was approved to begin by the Town of Oyster Bay. Construction started by October 2009, and continued throughout the fall and winter months.

The project is expected to be completed in the next two months. Those with an interest in the 3000sqft of retail space or one of six apartments, should contact Joseph Lovaglio with Elite Northshore Realty at (516) 921-5700.

The Oyster Bay Main Street Association is a 501 (c) 3 Non-Profit dedicated to enhance and promote a healthy economy and maintain the attractive and authentic character in the historic downtown of the Oyster Bay Hamlet. OBMSA achieves these goals using the nationally accepted Main Street™ Approach to downtown revitalization. Since our founding in 2001, over three dozen projects have been completed, resulting in over $10 million of investment. For more information, or to become a member, please visit http://www.oysterbaymainstreet.org/.
Posted by Oyster Bay Main Street Association at 1:30 PM