Where You Shop Matters - Support Our Community


With the holiday season upon us, we want to stress the importance of shopping locally to support our local business owners, who are our friends and neighbors, and to support the downtown as a whole.  According to the 3/50 Project for "every $100 spent in locally owned independent stores, $68 returns to the community through taxes, payroll, and other expenditures."  It was encouraging to see the success of American Express' Small Business Saturday as well as that of the Holiday Market set up by our Chamber of Commerce during the Christmas tree lighting last weekend.  We would love to see this trend continue throughout the holiday season!

We do, however, understand that many supporters of Oyster Bay do not live locally and so, we wanted to let you know of an opportunity to give back to our community while shopping online - not only now, but all year long.  Amazon.com has created the AmazonSmile Foundation and has pledged to donate 0.5% of the purchase price of eligible products to the Oyster Bay Main Street Association so that we can continue our mission of revitalizing the downtown.

To make sure a portion of your purchases go to support the Main Street Association please click the banner to the left and you will be taken to the AmazonSmile website.

After selecting to support the Oyster Bay Main Street Association, you can continue to shop as normal and Amazon will take care of the rest.  Make sure that upon returning to shop that you visit the AmazonSmile website: smile.amazon.com to ensure your eligible purchases have twice the impact!

Hope your holiday season is merry and bright!

Posted by Oyster Bay Main Street Association at 2:27 PM No comments: Links to this post

Thank You for Helping Us Get into the Holiday Spirit!

Despite the rain, the Oyster Bay Main Street Association's


December 6, 2014
Oyster Bay, New York - So many participants braved the rain to join us for the first leg of our journey, which began in St. Dominic's R.C. Chapel.  Participants began the tour seated in the pews learning a brief history of the church and its connection to the well known resident of Oyster Bay - Louis C. Tiffany.

Pieces all over the church have been examined by experts and almost conclusively determined to be the work of Tiffany, from its interior windows to the elaborate alter at the front of the church.  As the tour went on, participants were invited to take a closer look of the alter and even to venture to the balcony to take a closer look at - and play a few chords on - the church's beautiful organ.

We then made our way down the hill to our second stop of the trip - Christ Church of Oyster Bay.  The amazing thing about these churches is that despite their close proximity the architecture varies so drastically.  Upon entering Christ Church, participants were given a quick history of the church and shown several photographs of the church buildings that had stood on the site prior to the present one. The church's ties to Theodore Roosevelt and his family were also highlighted with several drawings and photographs from the President's funeral on display and perhaps most significantly the original pew where Roosevelt sat during his Sunday masses is still in tact.  Our gracious hosts also explained to the crowd the importance of the lay out of the church, which is in that of a cross, as well as the importance of the stories told in the stained glass windows.


As we made our way to the final destination - The First Presbyterian Church of Oyster Bay - our group had noticeably grown in number.  Upon arrival, we were treated to a presentation and question and answer session by Pastor Jeffrey Prey on the history and architecture of this beautiful building, which was listed on the National Register of Historic Places in 1976.  Following Pastor Prey's talk, the Mount Olive Baptist Church's Gospel Choir took to the stage and regaled the crowd with several selections from their repertoire.  The music was breathtaking and a perfect way to bring this years Yuletide Church Walk to a close.

Posted by Oyster Bay Main Street Association at 5:11 PM No comments: Links to this post 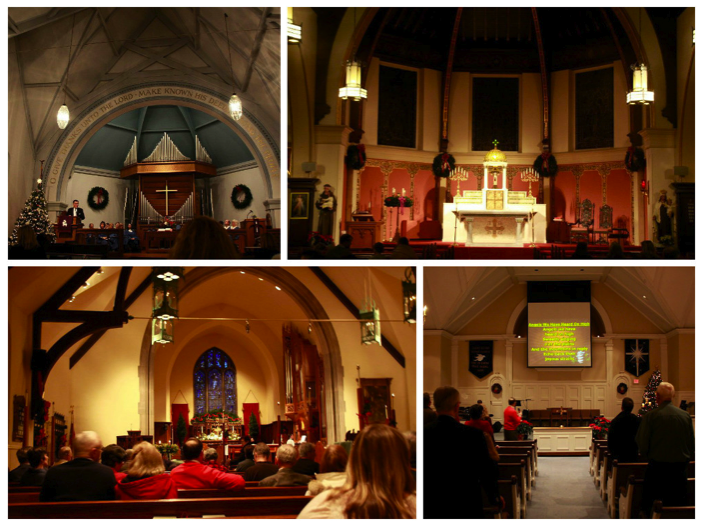 Please join us
Saturday, December 6, 2014­­
for an afternoon that is sure to get you in the holiday spirit!

Oyster Bay is fortunate to have a number of different churches, each with its own distinctive architecture and history.  And we are pleased to offer you the opportunity to learn about and see these historic gems up close, with holiday decorations and spirit at their most festive!

2 pm - Our Journey begins as St. Dominic's Chapel
93 Anstice Street
Where we will learn about the history and design of this beautiful chapel, which was first built in 1897.

2:30 pm - We head down the hill to Christ Church
61 East Main Street
Where a short film highlighting the history of the church and its ties to President Roosevelt and his family will be shown from 2:45 to 3:15,
including a Q & A session.

3:15 pm - We then process to The First Presbyterian Church
60 East Main Street
Where we will learn about the architecture and history of the 1873 chapel, which was listed on the National Register of Historic Places.

This event is free and participants are welcome to join us at any point along the way.

Looking forward to seeing you there!

Posted by Oyster Bay Main Street Association at 10:00 PM No comments: Links to this post