Oyster Bay is the Place To Be this Spring and Summer! 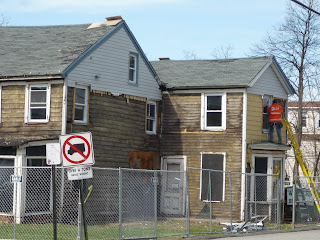 Workers removing vinyl siding from the Brower House at 39-41 East Main Street in preparation for rehabilitation with support from a New York Main Street grant.
New York Main Street Grant
Since receiving a grant from the New York Main Street Grant program of the NYS Office of Community Renewal, we have invested $200,000 in five projects. Goals of this program include taking actions to prevent dangers to public health and safety, to preserve historic properties in danger of being lost, to reduce blight and contribute to the economic recovery of the area, and to improve properties with a residential component. The Brower House rehab at 39-41 East Main Street, and Fiddleheads restaurant expansion are underway. Other projects include adding signs, awning, and lighting to the North Shore Bank Building (Coin Galleries of Oyster Bay) at 90 South Street, renovation of the Townsend Inn Annex (9 Audrey Avenue), and tuck-pointing of the building at 63 Audrey Avenue now housing Shangri La Spa.

These projects build on the success of recent efforts to restore the Octagon Hotel. This building at Spring and West Main Streets is rapidly nearing completion, and will have 6 apartments and 3 retail units when finished.


Main Street Member Meeting at Oakcliff Sailing Center on April 15
Recently a non-profit organization was formed to train the next generation of competitive sailors in the U.S. The headquarters of this organization are at 4 South Street, just north of the downtown area. There will be a Main Street Member Meeting on April 15, from 7-9pm at Oakcliff Sailing Center. Their new director will be present to share more about the work of the organization. David Waldo, Executive Director of The WaterFront Center will also be on hand to discuss some of the work WFC is doing.

You may RSVP for this meeting on our Facebook fan page.

Presently Oyster Bay is being considered for a $250,000 grant from the Preserve America program of the National Parks Service to go towards a $500,000 project. This would allow us to improve existing signage and to add new way-finding and interpretive signage downtown, and to produce a website and brochure promoting Oyster Bay. Partners in this effort include the Town of Oyster Bay, Oyster Bay-East Norwich Central School District, and the Long Island North Shore Heritage Area. We should know by early summer whether these funds are awarded.


Beautification Cocktail Fundraiser on April 19
A cocktail fundraiser with food tasting from local restaurants will be held Monday, April 19, 2010 at Dodds & Eder (221 South Street). Proceeds from the event which costs $65 per person, will go towards efforts to beautify downtown Oyster Bay. The fundraiser is being organized by the Oyster Bay Chamber of Commerce. Reservations may be made by contacting them at (516) 922-6464.


Oyster Bay Sundown
A live music series is being planned again for downtown Oyster Bay. Three restaurants: Canterbury’s, Fiddleheads, and The Homestead are all arranging to have live music every Thursday night. Live outdoor music will be provided the 1st Thursday of each month at Renaissance Plaza (24 Audrey Avenue) on June 3, July 1, & August 5, from 7-9pm each night. The kick-off for Oyster Bay Sundown will be held on May 3 at the Teaching Studios of Art to coincide with their spring registration drive. The last concert will be September 2 at The Homestead. These concerts are free and open to the public.
Posted by Oyster Bay Main Street Association at 9:27 AM