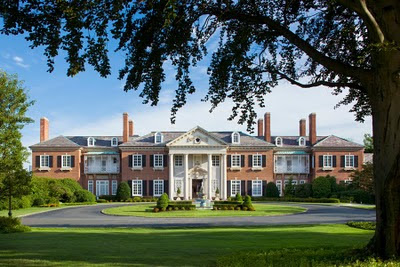 Glen Cove, Long Island, NY ... On Saturday, July 17th, Glen Cove Mansion will host a public Open House and Garden Party from 12:00 pm to 4:00 pm. Included at the event will be guided Mansion and Garden tours, fashions from America’s Gilded Age and England’s Edwardian Era, soccer and volleyball on the expansive Mansion lawns, games from the period including croquet and horseshoes, complimentary snacks, refreshments & beverages, and other assorted games and amusements including an old-fashioned tug-of-war finale! The Open House is in celebration of Glen Cove Mansion’s Centennial. The Public and the Media are invited to attend and admission is complimentary.

Glen Cove Mansion opened its doors to the John Teele and Ruth Baker Pratt family and their glittering society friends and business associates a century ago. The Georgian-inspired country home was one of five Pratt estates in Glen Cove. Mr. Pratt and his four brothers each had country homes constructed next to each other on land purchased by their father and the family’s patriarch, Charles Pratt. Charles Pratt was a pioneer of the U.S. petroleum industry, forming Charles Pratt and Company in 1867, which became part of John D. Rockefeller's Standard Oil in 1874. One of his most enduring contributions was Mr. Pratt’s founding and endowing the renowned Pratt Institute.

Although John Teele Pratt, who was an attorney and executive for Standard Oil, passed away in 1927, Ruth Baker Pratt continued to live in the Mansion until her passing in 1965. Mrs. Pratt made New York history following her husband’s death by being elected New York’s first Republican Congresswoman to the US Congress. She represented New York City's "Silk Stocking" district (Manhattan’s Upper East Side).

Originally known as “The Manor,” the circa 1910, 55-acre estate of John Teele and Ruth Baker Pratt, which remains intact, was considered by England’s respected Country Life Magazine (still in print today) as one of the "best twelve country houses in America." The Mansion was designed by the noted architect, landscape designer and artist Charles Adams Platt (1861-1933) who also designed the Smithsonian Institution's Freer Gallery of Art (1918) in Washington, D.C. The Pratt’s Georgian mansion was set in pastoral surroundings, and was an integral part of the many glamorous estates, which once comprised Long Island's legendary North Shore Gold Coast during America’s Gilded Age.

Guests to the Mansion, now an award-winning Hotel and Conference Center, enjoy the same arrival experience of the Pratt family. Upon traversing the quarter mile drive to the Mansion from the front gates, guests enter the Mansion through a stately two-story stone columned portico entrance where visitors are welcomed by a uniformed greeter. Once inside the reception hall, visitors enjoy an elegant, baronial double staircase, imported paneling, antique crystal lighting fixtures, carved marble fireplace mantles, and original murals on the lunettes of the barrel arched cross hall -- which imparts a feeling of being enveloped in a wonderful bygone era. The Gilded Age elegance of the Pratt Family remains at Glen Cove Mansion, which has proven to be magnificent setting for countless weddings and social affairs as well. Jay Gatsby would feel at home! Oyster Bay, New York - Sagamore Hill National Historic Site, the home of Theodore Roosevelt in Oyster Bay, Long Island, will present the Oyster Bay Community Band along with an appearance from Theodore Roosevelt as portrayed by James Foote on Thursday, July 22nd from 6:00 PM to 8:00 PM with a rain date on Friday, July 23rd. Under the direction of Stephen Walker, the band will perform traditional American music such as marches. This event is free and open to all.

The first floor of Theodore Roosevelt’s Home will be open for visitation. People are encouraged to bring blankets or chairs to sit on the lawn. There will be no food concessions available, but please feel free to bring your own snacks to the event.

This event is part of the Oyster Bay Main Street Association organized “Sundown Series,” which brings people out to enjoy local cultural attractions with musical entertainment. For a full schedule of Sundown events visit: http://www.oysterbaymainstreet.org

For further information about these programs or Sagamore Hill National Historic Site, visit our website at www.nps.gov/sahi or call 516-922-4788.

Sagamore Hill National Historic Site, located at 12 Sagamore Hill Road, Oyster Bay, New York, is a unit of the National Park Service. The site was established by Congress in 1962 to preserve and interpret the structures, landscape, collections and other cultural resources associated with Theodore Roosevelt’s home in Oyster Bay, New York, and to ensure that future generations understand and appreciate the life and legacy of Theodore Roosevelt, his family and the significant events associated with him. The site is open seven days per week. Tours of the home are limited to fourteen persons and are offered on the hour from 10am to 4pm. Tour tickets are five dollars each and tickets are sold on a first-come-first-served basis for each day beginning at 9 AM. The grounds of Sagamore Hill are open year round from dawn to dusk. For further information, visit our website at www.nps.gov/sahi, or call 516-922-4788.
Posted by Oyster Bay Main Street Association at 10:41 PM No comments: Links to this post