Oyster Bay Tries to Save a Piece of Railway Past 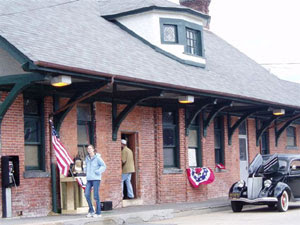 From The New York Times by Nicole Cotroneo:

Trains still rumble past the old Oyster Bay train station at the end of Audrey Avenue, though the only passengers are Long Island Rail Road employees heading to a rail yard. But if you stand within the brick walls of the 118-year-old station, in the center of the chipped tile floor below the chestnut timber roof, and close your eyes, you can imagine President Theodore Roosevelt stepping off a train.

That’s the experience trustees of the Oyster Bay Railroad Museum hope to provide when they formally open the station as a railroad museum. But because the project needs money, it remains a work in progress with no target date for completion.

The station — known as the home station of Roosevelt, the 26th president — stands less than five miles from his Oyster Bay residence, Sagamore Hill, the area’s main tourist attraction.

But Roosevelt’s story does not end at his estate’s boundary, museum trustees say. It continues in downtown Oyster Bay and at the train station, which went on the National Register of Historic Places two years ago. They envision the station as “a larger teaching tool,” said Liz Irwin, a consultant for the museum, simultaneously educating the public on Long Island’s railroad history and the president’s life locally.

The station now contains a few small exhibits, including drawings and photographs of the station through the decades and railroad artifacts like signal lights, which are open to the public on special occasions. The museum also owns or cares for seven pieces of heavy equipment, including a steam engine, a caboose, two passenger coaches and a boxcar. But most of these are not yet on site.

The trustees say $1.7 million to $3.5 million are needed to restore and convert the station completely, refurbish the rolling stock and bring a defunct turntable nearby to working order.

The effort to open a museum evolved from a more modest project to preserve a steam engine that hauled commuter trains until its retirement in 1955. A group, eventually the Friends of Locomotive 35, was formed in 1990 and broadened its attention to the train station and turntable as town officials discussed the possibility of opening a railroad museum in a 2002 hamlet plan, said Ben Jankowski, the museum chairman.

Last year the Friends became the Oyster Bay Railroad Museum under the auspices of the State Department of Education. The town, which bought the station from the Metropolitan Transportation Authority in 2005, is working on a contract to grant stewardship of it to the museum group, Mr. Jankowski said. The group subleases part of the adjacent rail yard from the town, where the turntable is situated and Engine 35 remains in pieces.

John Venditto, the town supervisor and an advocate of the museum, said he expected the town board would award the management contract to the museum group next month. He also revealed a special connection to the train station: His wife’s uncle once operated the turntable, he said.

Assemblyman Robert Walker said he was eager to see the museum become fully functioning. “It will promote economic development, lend a sense of history and educate the community,” he said.

The trustees agree that the museum is part of a larger revitalization project. “This is about making Oyster Bay a major regional destination,” Mr. Jankowski said.

Posted by InOysterBay at 3:08 PM