From The New York Times by Terry Golway: 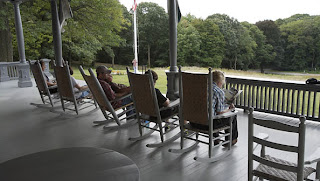 “Heritage tourism is taking off,” said Thomas A. Kuehhas, director of the Oyster Bay Historical Society on Long Island. Tourists, including day-trippers, are looking for “much more in the way of what you might call ‘edu-tainment,’” he said.

Competition for those “edu-tainment” dollars is stiff, and local historical societies, museums and government tourism agencies have become more creative in trying to lure heritage tourists...

OYSTER BAY, N.Y. — Speaking of the Roosevelts, the spirit of the other 20th-century president from New York, Theodore Roosevelt, is well and enthusiastically preserved at Sagamore Hill, his home in the historydrenched Town of Oyster Bay on Long Island’s North Shore, about 45 miles from New York City. Run by the National Park Service since 1963, Sagamore Hill feels like the family home it once was.

“Even the bathrooms and bedrooms are intact,” said Charles A. Markis, chief of visitor services at Sagamore Hill. And then there is the owner’s larger-than-life presence, still discernible nearly 90 years after his death. Visitors can “feel the presence of vitality in the Roosevelt home,” said Salvatore J. LaGumina, a history professor at Nassau County Community College.
Sagamore Hill, like most historic sites, has special programs for children, including a scavenger hunt on the grounds and a Junior Ranger program designed to help children understand the site’s significance.

The journey to Sagamore Hill ought to include time to explore the charm of Oyster Bay. There is a reason President Roosevelt chose to build his home in this historic town. Within two miles of the town’s mostfamous home are two historic churches, a colonial-era cemetery, the Planting Fields Arboretum State Historic Park, which includes plants from around the world, the Earle-Wightman House, which was built in the early 18th century, and Raynham Hall Museum, another 18th century building that was the family home of Robert Townsend, a spy for the Continental Army. “We have a solid core of buildings here in Oyster Bay that, thankfully, the town leaders were able to save and preserve years ago,” said Mr. Kuehhas of the Oyster Bay Historical Society.
Posted by InOysterBay at 3:06 PM