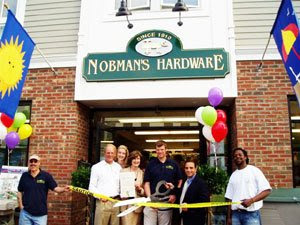 The Nobman family announced on Saturday, March 3 that Nobman's Hardware Emporium, their newly rebuilt retail hardware and home goods specialty store in downtown Oyster Bay, has officially reopened. On Sunday people were walking in to see the store and to take a tour of the new retail space. Outside on South Street were two Appalachian chairs. Inside Pendleton blankets were draped around the staircase leading down to an expanded basement site. Glinting in the sun were weathervanes mounted on cupolas ready to make your house distinctive.

Derrick Nobman was busy meeting customers and showing them around. He is getting out the message that the store will be open seven days a week with long elegant posters. That is good news to the community which has been looking forward to Nobman's rising out of the ashes after the devastating fire of 2005.

Derrick Nobman is continuing his family tradition of running Nobman's Hardware, following in the footsteps of his father and grandfather.

For more than 95 years Nobman's Hardware has been a fixture of the community, and a prominent driver of business and foot traffic in downtown Oyster Bay. The Nobman family pledged to remain in Oyster Bay and to restore this community icon, even while the ashes were still smoldering. The actual opening, which was held on Friday, Feb. 23, was the long anticipated culmination of two years of hard work on the part of the Nobman family to keep that promise to their neighbors - and to the employees who were such an integral part of the business - with the support of the local government and community.

Proprietor Derrick Nobman said, "Our family was devastated by the loss of the building, particularly my grandfather, Walter R. Nobman, Sr., who owned and ran Nobman's for 40 years with his brother-in-law George Hammond. We have had quite a ride getting the building back up and running, and consistent with today's code, but we are glad to be back in Oyster Bay. We plan to dedicate the building to my grandfather "Pops" who passed last year but was himself, along with my grandmother Elizabeth Nobman, a fixture of the Oyster Bay community."

Unique Retail Experience Returns
Nobman's Hardware is a full-service hardware, home furnishings and specialty store serving Oyster Bay and the outlying communities with products of exceptional quality at competitive prices, and with outstanding customer service. Customers can once again count on Nobman's to provide them with a unique blend of merchandise, including everyday hardware and home improvement supplies, a new selection of interior decorative hardware for cabinetry and doors, specialty housewares and the handmade works of local artisans. Nobman's will again feature custom designed and painted estate signs, handcrafted driftwood furniture and interior accents, custom made birdhouses and feeders, and meticulously reproduced custom prints of Long Island's many lighthouses.

Gold Coast Relic
Oyster Bay is an historic center on the North Shore of Long Island with history dating as far back as the pre-colonial era. Known for its central location on Long Island's Gold Coast, Oyster Bay was home to the great estates of the Industrial Revolution era captains of industry, and to former U.S. President Theodore Roosevelt. Nobman's began its long history as a supplier to the large estates owned by these historic figures. The Nobman's Hardware tradition is imbued with a sense of this history, and to the residents of the area, Nobman's represents one of the last remaining relics of the Gold Coast - a source of continuity through the generations.
Because the Nobman's Hardware building has tremendous historic and sentimental value to the community, and is such a visible part of the downtown streetscape, a great deal of effort was put into reconstructing the building to preserve the character of Oyster Bay's traditional waterfront community, while focusing on the challenges that lay ahead.

Building for the Future
Oyster Bay's proximity to the many beaches, estuaries, marshes and other important natural features that characterize the north coast of Long Island makes an emphasis on helping to preserve these treasures an imperative. Building with a focus on sustainability, the Nobman family succeeded in using green materials and practices through the many phases of construction. The new building features durable composite clapboard siding in place of traditional wood clapboard; a recycled composite that resembles slate tiling utilized on the exterior steps and as an interior decorative accent; and an efficient solar powered radiant heating and cooling system.

Property Owner Richard Nobman said, "We wanted to build a building that complemented the downtown and retained the character of the old building. We also wanted to build the greenest building possible within our budget. The net result is a great new building designed to carry us through the next 100 years of business. We are thrilled to be back!"
Posted by InOysterBay at 3:13 PM