Third Annual Dancing in the Street! Starting in July! 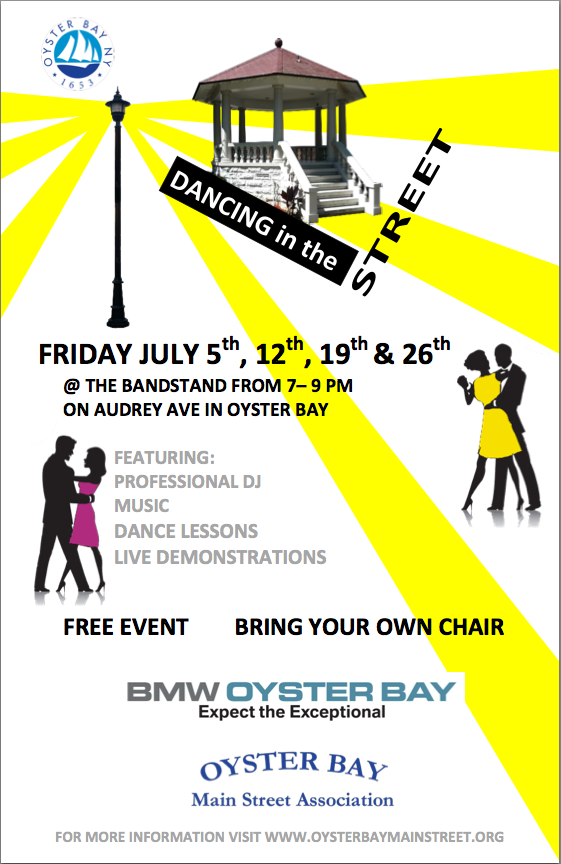 May 20, 2013, Oyster Bay, NY—Dust off your dancing shoes!  The Oyster Bay Main Street Association is thrilled to announce the return of “Dancing in the Street,” a series of free dance evenings on the streets of historic, charming Oyster Bay.
Following on the success of last year’s “Dancing in the Street,” OBMSA is calling dancers of all ages, skills, and styles—even those with two left feet—to come out for delightful evenings of pure fun under the stars.  This year BMW of Oyster Bay has most graciously offered to sponsor the entire series.  And—like last year—they plan to bring several of their newest model cars to put on display for everyone’s viewing pleasure.
Mark your calendars now for the four Fridays in July:  Friday, July 5th (we’ll kick off the July 4th weekend), Friday, July 12th (coinciding with St. Rocco’s Festival), Friday, July 19th, and Friday, July 26th.  The hours are 7:00 to 9:00 p.m., on Audrey Avenue around the Bandstand.  Bring a chair if desired.
Music and dance instructions will be provided by several of Long Island’s most popular DJs/Dancers.  All steps are geared for singles and couples alike.
Louis del Prete will take the lead on July 5th.  He has a huge following, and participants may remember him from the past two years.  Not only is Louis an excellent ballroom dancer and teacher, but he is also a talented musician and singer! At one time he taught dance on popular cruise lines, and now he teaches group and private lessons and runs many dance venues.  For Oyster Bay he will play all types of music from the 1940’s right up to today.  Included will be line dancing, Latin music, ballroom, and any other style desired.
Mark James (“United States Champion” & “Dance Teacher of the Year”), assisted by Karen Lupo (“United States Latin & Rhythm Finalist”), are full time professionals who also have a large following on Long Island.  They will be gracing the stage (also known as the street) on July 12th and 26th.  They have been featured performers at many dance competitions and fundraisers, and on PBS.  From Salsa to Hustle, from elegant to upbeat, with some Sinatra, Pop, and Swing thrown in—Mark will wow you with his style and quickly inspire you to  join in.
Marianne Taylor’s energy is contagious.  On July 19th she will be doing what she loves and does best:  teaching line dancing.  She likes teaching beginners the best, because of the “eureka” moment when they suddenly remember the pattern of the dance steps.  As Marianne says, “Line Dancing is exercise in disguise!”  Some of the line dances she plans to teach us include:  Boot Scoot n’ Boogie, Ah Si, Mamma Maria, and Cowboy Charleston.  She will also teach a partner dance El Paso, which can be done alone or with a partner.  Come on down!

“Dancing in the Street” is one of the community building/downtown revitalization efforts organized by the Oyster Bay Main Street Association (OBMSA).  As Promotion Chair Diane Meltzer commented, “what is there not to like about a starlit night in a beautiful town, good music, and fun dance instructions?  Everyone loves it!"
General Manager Bob Federico of BMW of Oyster Bay said, “We’re honored to sponsor this event.  Oyster Bay is a great town with great people, and it’s our pleasure to participate in something that brings so much joy to all ages.”