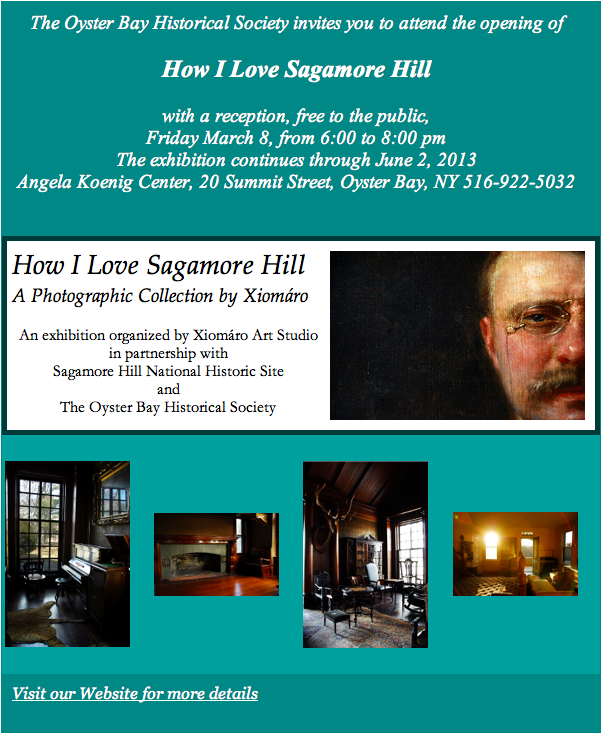 The Oyster Bay Historical Society opens its spring exhibition with the fine art photographic series Theodore Roosevelt – “How I Love Sagamore Hill” by Xiomáro (pronounced SEE-oh-MAH-ro), a Long Island artist. Xiomáro photographed the interiors of the President’s house at what is now Sagamore Hill National Historic Site. The collection of over 140 photographs was created last year during the removal of the mansion’s contents and furnishings as part of a three-year, $6.2 million structural rehabilitation by the National Parks Service. The debut exhibit features 20 photographs from the collection with each image uniquely titled so that a poetic narrative unfolds about TR and his household. The photographs remain on view at the Society’s Koenig Center through June 2. The exhibit then travels to Harvard University for a year-long display with plans to invite documentary filmmaker Ken Burns as a speaker.
Free Photo eBook
The artist is also offering a free photo eBook, based on the exhibit, at his website: www.xiomaro.com. The website includes information on viewing hours and a series of free gallery talks presented by the artist.
Rarely Seen Views

Theodore Roosevelt’s famed “North Room” by Xiomaro
The photographs show the house in a historically rare condition in that the 22 room mansion, usually chock full of furnishings and mementos, was nearly vacant. Yet, “so much of the Roosevelt family’s personality is revealed by the house,” said Xiomáro, “even though its occupants – and now most of its contents – are absent from the premises.” Images from the exhibition reveal not just the imposing character of America’s 26th President, but also the more intimate domestic nature of his family, such as the textured sconce globes of Edith Roosevelt’s drawing room. “Some of these details,” continued Xiomáro, “may have previously been overwhelmed by a room’s furnishing, or inaccessible to visitors behind velvet rope barriers.”  The artist produced a video with commentary from staff at the Historical Society and Sagamore Hill as well as from Elizabeth Roosevelt, a descendant of the President.

Posted by Oyster Bay Main Street Association at 10:25 AM