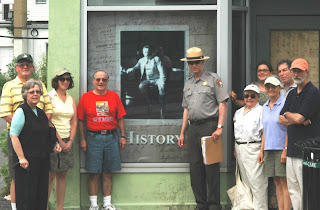 Oyster Bay– Join Park Ranger Howard Ehrlich on Sunday, February 19, 2012 on an easy walk through historic Oyster Bay. The walk will highlight the major sites in the hamlet connected to Theodore Roosevelt and his family. The one hour program is free and begins at 2:00 p.m. in the Long Island Railroad parking lot at the Oyster Bay station. Please wear comfortable walking shoes and dress appropriately for the weather.

Sagamore Hill National Historic Site, located at 12 Sagamore Hill Road, Oyster Bay, New York, is a unit of the National Park Service.  The site was established by Congress in 1962 to preserve and interpret the structures, landscape, collections and other cultural resources associated with Theodore Roosevelt’s home in Oyster Bay, New York, and to ensure that future generations understand and appreciate the life and legacy of Theodore Roosevelt, his family and the significant events associated with him. NOTE: The Roosevelt Home was closed to the public for a two- to three-year period beginning December 5, 2011 due to a major rehabilitation of the home.  However, the Visitor Center, Theodore Roosevelt Museum at Old Orchard and the grounds will continue to be open and free interpretive programs will be offered.  For further information, visit our website at www.nps.gov/sahi, or call 516-922-4788. Be sure to follow us on twitter for updates at http://twitter.com/SagamoreHillNHS and on Facebook at http://www.facebook.com/pages/Sagamore-Hill-National-Historic-Site/127271867334480