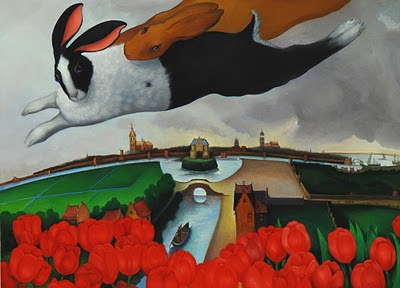 Jerelyn Hanrahan is an American artist who has lived and traveled extensively in Europe. She has recently returned to her original medium of painting, through a series of enamel paintings on carton paper.

Her drawings have been exhibited in the Aargau Kunsthaus, In Switzerland, the Venice Pavillion in Venice, Italy, and Beijing, China. In 2009, her drawing series Schwarz Blumen ( Black Flowers ) represented by Pierogi 2000 Gallery were exhibited at the Andy Warhol Museum in Pittsburg, Pennsylvania. Her drawings were also in an exhibition Aquarelle, at the Rohmer Apoteke Gallery in Zurich, and two solo exhibitions at Rolf Muller, Art Magazin in Zurich, and an exhibition entitled Gestures at Galerie Francesca Pia in Bern, Switzerland.

In 1997 Andrea Zust published a book of 97 drawings by Ms, Hanrahan entitled Notations On A Trek, with three poems by British poet Max Blagg. A reading by the poet was at The Drawing Center in New York, and at Atelier Studio / Fine Arts in Oyster Bay. Jerelyn Hanrahan runs her professional studio in Oyster Bay where she is currently completing a public sculpture entitled Graduated Pearls.

Fleur Palau is an American artist trained in both New York and Florence, Italy.

Ms. Palau has lived in Italy for over 20 years, where she has drawn inspiration for her work.

The rabbit series is whimsical, yet sometimes a moody reflection of the human psyche. The full-meaning of these paintings is of course open to speculation, though the artist recognizes the use of symbolism as a vehicle to reveal useful messages about ourselves. Ms. Palau's work has been exhibited widly in Italy, and the United States, and is represented by The Three Graces Gallery, Portsmouth, NH; The Millbrook Gallery, Concord, NH; The Kevin Milligan Gallery in Danville, California; and J. Todd Galleries in Massachusetts. Recent exhibitions include The Portsmouth Museum of Art; The Human Animal in the Millbrook Gallery, N.H.; Four Legged, The Three Graces Gallery, Tulipomania, N.H.; and The Childrens Museum of NH in Dover, University of Dover in Portland, Maine.
Posted by Oyster Bay Main Street Association at 11:03 AM