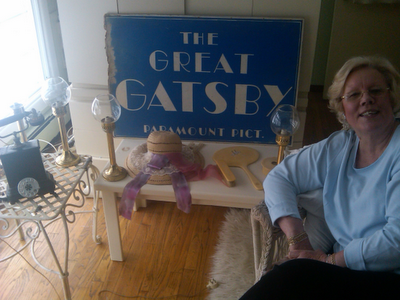 Photo by Ellen Ermanovics
“The green light” at the end of Daisy’s dock will be an invitation to all to watch F. Scott Fitzgerald’s tale of 1920 society life on Long Island. Eve Griffon will be on hand for a screening of The Great Gatsby this Friday, 7:30pm at 17 Audrey Avenue in Oyster Bay. Her husband, Bob Griffon, Sr., was one of the many technicians from Long Island who worked on this film during the summer of 1974. The filming of The Great Gatsby took place on Long Island and in Newport, Rhode Island.

The cast included Robert Redford, Mia Farrow, Sam Waterson [before he worked on Law & Order], Bruce Dern, Karen Black, and Lois Childes. They loved making this film, as the sets and costumes were all unique. Bob Sr.’s movie resume include The Exorcist, Godfather I & II, Saturday Night Fever, Tootsie, and The World According to Garp. Today the Griffon Family is still making movies in New York and on Long Island.

Please come to Oyster Bay on March 11th and enjoy the show!