Anybody remember the old Lyric Movie Theater on Audrey Avenue? 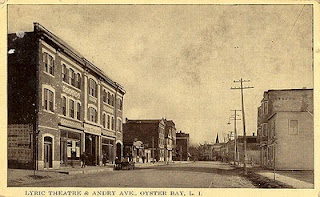 It’s been about 30 years since downtown Oyster Bay had a movie theater, but starting in February we’ll have a modified version of a theater—also on Audrey Avenue—for Long Island film lovers to enjoy! Come gather, eat, drink, watch and discuss!

LI has had a resurgence as a film backdrop in recent years. But this is only the latest chapter in almost a century of local moviemaking. As far back as the 1920's, in the era of silent movies and early talkies, about a hundred films had LI locations. Filmmakers then left LI for several decades of Hollywood life, but returned in the 1950's when they portrayed the Island as a place of leisure and glamour. And did you know that a man named Fred Waller invented CINERAMA (the real beginning of commercial widescreen motion pictures) in 1952 right here in Oyster Bay?
To celebrate this vibrant history, The Oyster Bay Main Street Association is proud to offer a new film series called “OYSTER FLIX,” with an initial run of three classic movies filmed in part on the north shore of Long Island.

Dates and Schedule: The Second Friday of each month:

Friday, February 11th ~ “Sabrina” (1954, the original film)
RSVP on Facebook today! (and help get the word out to others)

Fee: $5 suggested donation /per person at the door

What to bring: ‘Movie snax’ will be available but please bring your own beverages


Films will be immediately followed by a group discussion hosted by a speaker.
Posted by Oyster Bay Main Street Association at 11:03 AM