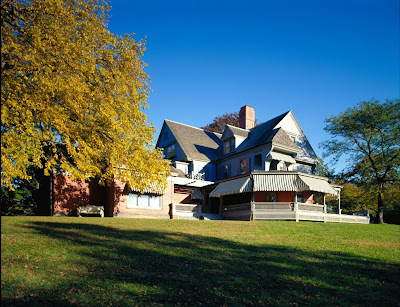 The day’s events will include Traditional American Band Music from Theodore
Roosevelt’s era performed by the Sagamore Hill Band.

Demonstrations will include a blacksmith, a bee-keeper and local partners
with a variety of conservation themed exhibits. The site will host pony
rides, and a farm animal petting area will be set up featuring the farm
animals housed on the site while the Roosevelt family lived here. In
addition, there will be sheep shearing demonstrations. James Foote,
portraying Theodore Roosevelt, will be present all day.


Food service of traditional American fare: hamburgers, hot dogs and popcorn
will be available on the site or you may bring your own picnic. Visitors
will be provided an opportunity to tour the Roosevelt home and to view the
exhibits at the Theodore Roosevelt Museum at Old Orchard as well as walk
the grounds and Nature Trail. All of the events, admission to the Roosevelt
home are FREE (with the exception of the pony rides and petting area).

The rain date for the festival will be Sunday, October 24th.
Posted by Oyster Bay Main Street Association at 10:18 AM