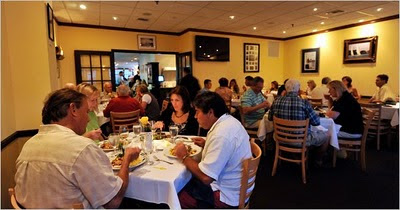 Accent on the Nautical, From a Lover of Sailing
By JOANNE STARKEY
A LOVE of sailing led Bernie DelBello to buy the restaurant Fiddleheads last year with a partner, Michael Ventre, in boat-loving Oyster Bay.
They ran the 10-year-old Fiddleheads under that name while preparing for its reopening as Jack Halyards in July. They added a new room, nearly doubling the dining space, and gave the bar its own dedicated room.
The name Jack Halyards — taken from a 19th-century fictional seaman — signals the sailing connection, as do the nautical flags in the bar. The walls of the new dining room are crowded with paintings, drawings, photographs and models of sailboats.
In a phone conversation after my visits, Mr. DelBello, who previously owned Walk Street restaurant in Garden City, said he wanted a place appropriate for milestone dinners yet casual enough for sailors coming off their boats. One night a family near us was celebrating a wedding anniversary; other diners, wearing shorts, had fresh sunburns attesting to a day on the water.
The menu caters to both groups with sandwiches and small plates, as well as full-fledged entrees with inventive accompaniments. The chef is David Glatzerman, an eight-year veteran of Fiddleheads, and his dishes, with only a few exceptions, were right on the mark. The smiling, attentive wait staff was another plus.
The best appetizer we tried was listed with the small plates, a mound of lush tuna tartare mixed with avocado and mango. We also liked the flavorful Manhattan clam chowder. A special of figs stuffed with Gorgonzola and drizzled with balsamic syrup was a light, appealing opener. The Caesar salad was standard, but the strawberry-endive salad with frisée, baby arugula, feta, mint and a honey-red wine vinaigrette was inventive and delicious.
Char-grilled Cajun oysters, six plump ones, were lightly cooked and had a bit of a welcome kick from cayenne and hot sauce, but the pecorino butter on top was a bit too assertive for the seafood.
Two selections from the small plates roster served nicely as entrees. Lobster sliders consisted of two tasty small sandwiches piled high with lobster, a bit of bacon and a slice of tomato. Seared baby lamb chops, which came with a slightly sweet honey-mint sauce, were initially served purple rare. (Our waitress had not asked how we wanted them cooked.) After a few more minutes on the grill, they were pale pink and juicy. A side of à la carte sautéed wild mushrooms was a treat.
Our favorite entree was the tender, juicy pork chop with a hickory-flavored crust crowned with a chutney of caramelized green apples and mint and set on a charred corn and black bean salad.
In close second place was the grilled mahi-mahi on a bed of potato and string-bean salad and topped with a pineapple-mango salsa. The fish and chips was another winner: the fries were ordinary, but the fish, with its light beer batter, was way above average.
The rib-eye steak, by far the most expensive entree at $32, was juicy and tender, and the roasted garlic Yukon mashed potatoes and grilled asparagus served with it were first rate. However, the meat was topped with a Gorgonzola-horseradish butter that was not mentioned on the menu. I like those flavors, but some diners might not.
Desserts are outstanding. The scene-stealer was a huge wedge of coconut cake, 11 layers of towering goodness: six layers of yellow cake, five of coconut custard, plus a fluffy seven-minute frosting under a blizzard of coconut. As good as it was, three of us could not finish it. A special of warm peach cobbler à la mode was even better, with buttery crumbs laced with brown sugar. An apple crisp was also noteworthy. Toasted coconut crème brûlée was thick and silken, and a flourless chocolate cake rich and fudgy, served with a mound of freshly whipped cream.
Sailors and nonsailors alike will find plenty to like at Jack Halyards. That goes double for those with a sweet tooth.
Jack Halyards 62 South Street
Oyster Bay
(516) 922-2999
jackhalyards.com

WORTH IT
THE SPACE Two appealing dining rooms, one casual and the other less so. One step at the entrance. Restrooms are wheelchair accessible.
THE CROWD A mix of celebratory groups, couples and casual boaters. Some children. The wait staff is attentive and personable.
THE BAR A separate room with a long bar, about a dozen stools and five high tables. Wine list of 48 bottles ($24 to $90) and 14 selections by the glass ($7 to $9).
THE BILL Dinner entrees, $10 (burgers and other sandwiches) to $32 (rib-eye steak). Prices are reasonable, with most entrees under $20. American Express, MasterCard, Visa and Discover are accepted.
WHAT WE LIKED Manhattan clam chowder, stuffed fresh figs, strawberry-endive salad, tuna tartare, lobster sliders, fish and chips, mahi-mahi, pork chop, rib-eye steak, all desserts.
IF YOU GO Sunday, noon to 9 p.m.; Monday to Thursday, noon to 10 p.m.; Friday and Saturday, noon to 11 p.m. Reservations are recommended, essential on weekends.
RATINGS Don’t Miss, Worth It, O.K., Don’t Bother.
Posted by Oyster Bay Main Street Association at 9:39 AM