Two buildings on South Street, extending around the southwest corner on Audrey Avenue--and dating from the turn of the last century--received new paint colors and architectural details that aligned them more closely with their Victorian heritage. 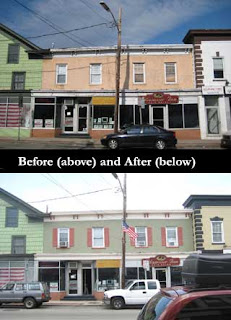 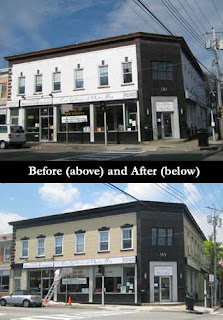 The Coin Gallery’s former stark white upper story was painted a warm beige shade from the Benjamin Moore Historical Colors palette, and the existing brick pattern was highlighted in black around the windows. The building to the south was painted a very pleasing sage green shade with terracotta accents in the form of newly added shutters. The brackets at the roofline were also highlighted. It is common and historically accurate to have buildings from the Victorian era wear two or even three different paint colors.
Back in the summer of 2006 the Oyster Bay Main Street Association Design Committee, chaired by architect Ellen Roché, reached out to Mario Vezza, the owner of these properties. They showed him rendered color schemes, and the buildings today reflect colors very close to those renderings. Mr. Vezza said, “This is the first time in my life I ever picked colors. Usually my wife does it. I think it came out great.”
The Coin Gallery, built by Andrew Snouder in 1907, was originally called the North Shore Bank Building. Teddy Roosevelt had his personal vault in the basement and it is still there. The building used to be more of a square shape, with the corner jutting out to the sidewalk edge. In the 1930’s this was cut to make the corner entrance of black granite that shines today.
Larry Berkovitz, one of the owners of the Coin Gallery, is very pleased with the new look of the facade, and happy that his landlord chose such nice colors. He said, “I love the colors they chose. We think it’s fabulous that they’re sprucing up the town.”
It is exciting to see what a difference new paint colors can make in the appearance of the downtown. Parade watchers on the Fourth of July were overheard remarking on how attractive the facades looked.
Any other businesses hoping to achieve a similar outcome are welcome to contact the Oyster Bay Main Street Association for facade improvement suggestions at 516-922-6982 or http://www.oysterbaymainstreet.org/.
Posted by InOysterBay at 10:23 AM