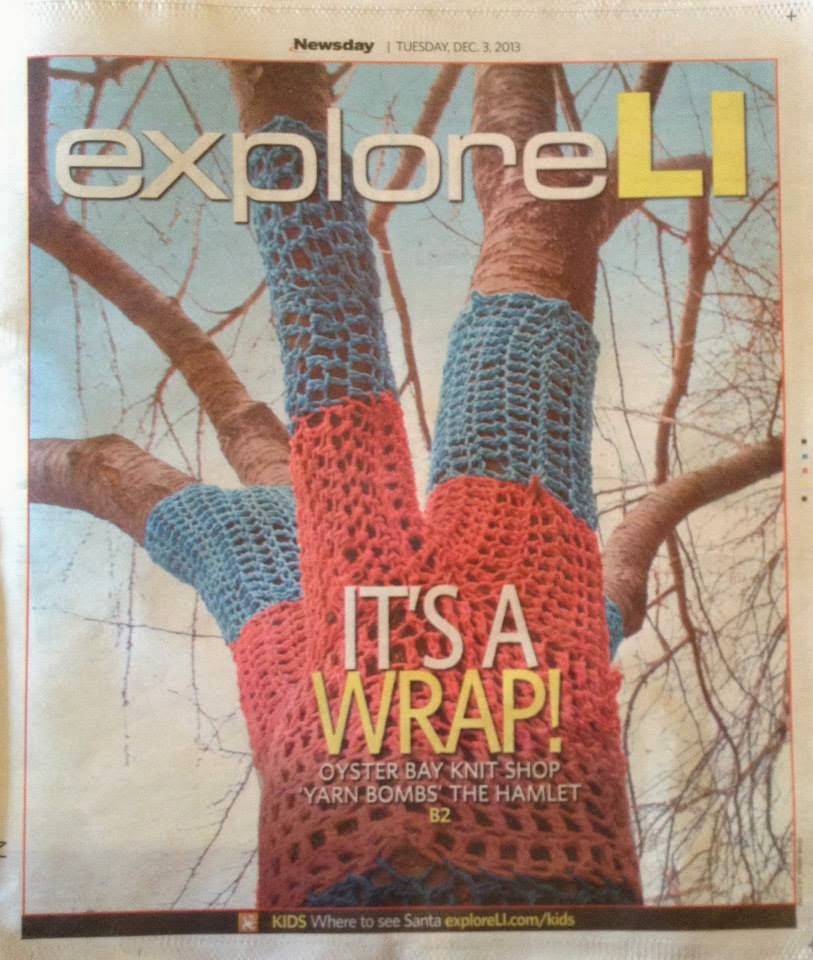 The Hand-stitched Hamlet, the fiber art installation slated for installation in the downtown of Oyster Bay in Spring 2014, is making headway with sponsorships and making headlines in Newsday!  Articles, videos and galleries are available on the Newsday website.

Starting this Sunday, December 8, 2013 the Knitted Purl will be hosting crochet boot camps for those interested in volunteering their time to make the crochet panels that will adorn our streets! Learn how to do simple crochet stitches for free on needles and yarn provided for you!

You can learn more about the event by visiting the Hand-stitched Hamlet Facebook page or by contacting Patti McSkane at 516-558-7800.

Get excited and get involved!!

Knitting project will put a sweater on Oyster Bay

Patti McSkane is undertaking a challenging yarn project. A complicated sweater, you say? A matching hat and booties for a baby?
Ha!
Think muuuuuch bigger.
McSkane, owner of The Knitted Purl yarn shop in Oyster Bay, wants to see crocheted or knitted panels decorate all of Oyster Bay's downtown. She envisions colorful bands wrapping the trunks and lower branches of 48 trees, the poles of 45 lampposts, the sides of four informational kiosks, plus the hamlet's gazebo and three ceremonial cannons.
McSkane has partnered with a professional fiber artist to get the installation -- dubbed "The Hand-Stitched Hamlet" -- in place for public viewing by spring.
They've wrapped four "sample" trees downtown to show locals what an ambitious installation could look like. Their quest elaborates on the worldwide trend of "yarn bombing" -- which is creating clusters of woven graffiti-esque art on public objects.
"Already people stop I don't know how many times a day to take pictures," says Catherine Drabin, owner of Chrison & Bellina on Audrey Avenue, which has a decorated tree in front. "I've got a burst of color right outside my door."
VOLUNTEERS NEEDED
Meanwhile, McSkane needs help to make the 500 panels of macramé nylon cord in nautical colors such as aqua and royal blue as well as raspberry, green and purple. She's enlisting all interested crocheters and knitters on Long Island and is even hosting free knitting/crocheting "boot camps" to instruct volunteers how to make the 18-inch-high panels -- the first is 2 p.m. Sunday at her store on South Street. Even kids ages 8 and older can participate with an adult. Yarn and needles will be provided -- crochet hooks the size of tapered candles and knitting needles the size of drumsticks.
"You pay nothing. It's your sweat we're looking for," McSkane says. Other local businesses will sponsor upcoming crochet/knit nights.
Groups or organizations also can sponsor items to be wrapped in yarn, which will get them a sign or tag next to their object. A lamppost is $50, a cannon is $75, trees run $120-$200 and the gazebo is $500. Proceeds will go to the Youth and Family Counseling Agency of Oyster Bay and East Norwich.
GERM OF PROJECT
McSkane and her husband, David, opened The Knitted Purl last December in a blue house downtown. The shop sells yarn and offers lessons. "One of the things I really wanted to celebrate was the artistic side of fiber art," Patti McSkane says.
McSkane called Carol Hummel of Ohio, who has designed and executed fiber installations in Norway, India and cities in the United States, to ask permission to hang photos of her works on the walls of The Knitted Purl. She told her, 'We'd love to have you come to Oyster Bay.'"
A few months later, Hummel did, installing the four sample trees. Once the 500 panels are finished, Hummel will return. "What I like to do with my projects is involve communities in creating art that is their art," Hummel says. She says it will take about two weeks to stitch the completed panels to the trees, poles and other objects around town.
TOWN PROJECT
The project has become a group effort, with the Oyster Bay-East Norwich Chamber of Commerce, its Friends of the Hamlet group and the Oyster Bay Main Street Association getting onboard.
"It's infectious," says Walter Imperatore, Chamber of Commerce vice president. "Just the idea of knitting all these things is going to bring people in and get them talking to each other."
Meredith Maus, executive director of the Oyster Bay Main Street Association, crocheted one of the panels for the four sample trees. "It's really simple; it's very straightforward," she says.
The goal is to have the project finished in time to complement Oyster Bay's Sunday Art Walks. One Sunday a month in the summer, artists line the streets of Oyster Bay, showcasing their work, drawing tourists from across the Island. Visitors can have brunch at one of the hamlet's restaurants, then peruse the art on the streets and in the galleries around town. The Art Walks culminate in a weekend Family Arts Festival in September.
"When you come into town, it's going to be transformative," McSkane says. "When the whole town is done, it's going to be amazing."
CROCHET/KNIT BOOT CAMP FOR 'THE HAND-STITCHED HAMLET'
WHEN|WHERE 2 p.m. Sunday at The Knitted Purl, 80 South St., Oyster Bay. Advance registration required.
Posted by Oyster Bay Main Street Association at 2:21 PM