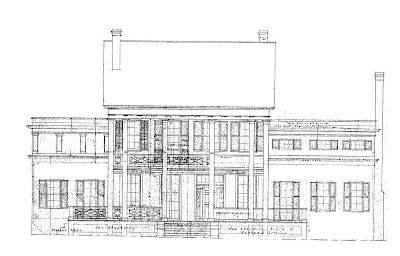 Oyster Bay, NY – The Oyster Bay Historic Preservation Roundtable has launched a community-wide campaign to raise $60,000 to address the pressing stabilization needs of the Adelia and Cornelius McCoon House, the 1844 summer cottage that served most recently as the home of Dr. James Trousdell and family. The house and two-acre property at 198 East Main Street and the corner of Sandy Hill Road was purchased this spring by the North Shore Land Alliance. They are in the process of placing a conservation easement on the property, and making the property available to purchase by a private buyer. The campaign will culminate in a final community thank-you reception held at the house on September 18 from 4 p.m. to 8 p.m., where all supporters will gather to celebrate the success of their mission.

At the heart of the campaign is the Shadow Ball—a “danceless” fundraiser for which donors purchase tickets to an imaginary ball as their contribution to the McCoon House’s stabilization fund. Such a stay-at-home event is an Oyster Bay fundraising tradition of sorts. Mrs. Chauncey B. Garver, who owned the house with her husband from 1920 to1949, put on shadow balls to raise funds for charity. And, more recently, Angela Koenig arranged stay-at-home Mother’s Day events in support of the Doubleday-Babcock Senior Center (now the Life Enrichment Center).

Lisa Ott, President of the North Shore Alliance said about the event and also the fundraising effort, “I could not imagine a better way to protect this notable house and the land it rests on, then by taking a page from Mrs. Chauncey B. Garver’s fundraising playbook. The Shadow Ball will give us the resources needed to stabilize this important house, so it may be passed on to a buyer with an interest in conservation of the land and preservation of this important building.”

The Cornelius & Adelia McCoon House was originally a Greek revival home with Colonial Revival details added later around 1913. This is one of Oyster Bay’s last remaining examples of a summer colony destination for nineteenth-century visitors that included members of the Roosevelt and Irvin families. The Oyster Bay Historic Preservation Roundtable’s campaign to raise funds for immediate repair and stabilization work represents the first crucial step in preserving such a vital symbol of Oyster Bay history.