Main Street Announces over $100,000 in Improvements to Downtown Oyster Bay

Oyster Bay, New York – The Oyster Bay Main Street Association is pleased to announce that over half of a total of $200,000 in grant dollars have been awarded for building renovation and streetscape improvement projects. 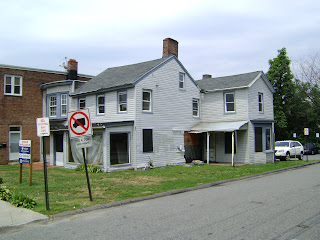 The Brower House is one of several buildings targeted for rehabilitation through the New York Main Street grant program.

The first project to be funded is rehabilitation of the Brower House at 39-41 East Main Street. New York Main Street grant dollars will help to create one to three commercial units on the ground floor and two residential units on the upper floor.

The Brower House was built prior to the Civil War and is one of the oldest remaining residential buildings in the downtown area. Francis Brower, a milliner, is shown to have resided in the building as early as 1869. One of the Brower children, Wilber Brower, would later go on to marry Lois G. Bryant, a direct descendent of William Cullen Bryant. Fannie Brower is the last known Brower family member known to have resided in the family house, passing away some time after World War II.

Fiddleheads Restaurant is the second project to be funded. Investments here will help to stabilize an existing business, and contribute to recovery in the South Street corridor. Dollars are being allocated to facilitate expansion of the existing restaurant into an adjacent unit in the building they are located in. Historically appropriate signage will be added to the exterior, increasing the visibility of this business.

The Coin Galleries of Oyster Bay is being provided funds to upgrade and improve their signage on their building at the corner of South Street and Audrey Avenue. The design for this project is under consideration by the Oyster Bay Main Street Design Committee. This design calls for historically appropriate awnings over the windows, and carved historically appropriate signs above.

Another project tapped for New York Main Street grant dollars is Il Piatto restaurant which is re-branding itself as The Homestead. Grant dollars here will be used to help re-skin the existing awning, and install a new carved sign with gooseneck lighting.

An additional $25,000 is being targeted for streetscape improvements in the downtown area. Particular emphasis is being placed on improving lighting and signage on South Street, East Main Street, and Audrey Avenue Extension.

A second round of applications is being accepted for the remaining funds to be awarded. Projects eligible for funding must be located in the three block “target area” including the main intersection of Audrey Avenue, East Main Street, and South Street, and bounded by Spring Street and Audrey Avenue to the West, Hamilton Avenue to the North, White Street to the East, and East & West Main Streets to the south.

Building or business owners in the project area are eligible to apply for up to $40,000 per building, with an additional $20,000 per assisted residential unit available. The grant will require at least a 25% cash match on the part of the owner.

Oyster Bay Main Street Association will be responsible for selecting projects from applications received. Main Street President Ellen Roché said, “At the direction of the state we are especially looking for projects in the target area that have historic value, are visually prominent on Main Street, or that will, with the assistance of grant funds, realize a stabilization or expansion of a Main Street business.”

Completed applications are due by 4pm on Thursday, January 7, 2010, and may be delivered to the Main Street program office at 55 East Main Street, Oyster Bay. The grant application may be found on the Oyster Bay Main Streets website at www.oysterbaymainstreet.org or a copy may be requested by calling (516) 922-6982 or writing to oysterbaymsa@gmail.com.
Posted by InOysterBay at 6:04 PM