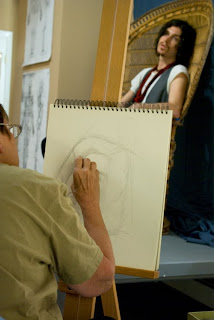 On Thursday, August 27 Town Clerk Steven L. Labriola participated in a ribbon cutting
ceremony to commemorate the opening of Oyster Bay’s latest addition to its community, the Teaching Studios of Art. For their next community event, Rob Zeller, Director of the Teaching Studios of Arts and his faculty are hosting Art Equinox 2009, an art and music reception at the Studio, located at 115 Audrey Avenue on Friday, September 25 from 7 pm to 10 pm. Light refreshments will be served. The aim of this event is to highlight the art work of students and faculty, and to raise the profile of the school in the North Shore community.

The Teaching Studios of Arts joins L’Industrie Skateboards and the Railroad Museum on Audrey Avenue which may soon become known as the "artsy" end of town. Bill Burke, Organization Committee Chair of the Oyster Bay Main Street Association said, "SOHO has come to Oyster Bay. Teaching Studios is a powerful affirmation of Main Street's decade-long commitment to revitalize the historic Hamlet of Oyster Bay, relying on its unique assets and strengths including history, arts, and culture."

Rob Zeller, Director of the Teaching Studios of Art, is no stranger to the arts community in Oyster Bay having previously taught at the Stevenson Academy of Fine Art, which was once also located in Oyster Bay. “Oyster Bay has a great deal of charm that is very attractive to artists like myself. From the pristine waterfront to the beautiful architecture, a human-scale downtown, access to the LIRR, and, of course, the rich history that is so much a part of this community. This town has all the elements to make it an ideal hub for an arts community and I hope the school will be instrumental in making that happen,” said, Zeller has also taught at the New York Academy of Art and the Long Island Academy of Fine Art and has exhibited his works in
galleries in New York City and across the country. Zeller received a BFA from the Boston Museum School and Tufts University, and an MFA from the New York Academy of Art. He studied with Jacob Collins at the Water Street Atelier and is the recipient of two Posey Fellowships and a Pollock-Krasner Foundation Grant. 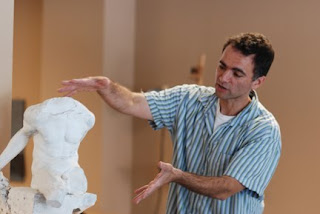 The Teaching Studios of Art began soon after Zeller started teaching landscape lessons in Central Park. When it became too cold to paint outside in winter, Zeller moved the classes indoors to an art studio in Brooklyn and thus was the birth of the first Teaching Studio of Art. The new studio in Oyster Bay is the second campus for the school.

The mission of The Teaching Studios of Art is to train artists in traditional techniques practiced for centuries before the advent of Modernism. Zeller and his fellow teachers equip students of all ages with the strengths of time-tested techniques and believe that creating a vibrant artistic environment enriches the aesthetic and cultural life of the surrounding community. "By focusing our efforts on training artists in traditional techniques that are sometimes difficult to master, we feel we are offering a chance for personal improvement as well as artistic growth. Our faculty is comprised of highly trained and skilled artists who have exhibited their work in New York and around the US. Our classes are small, and students receive much personal attention. Our clients are our community, and we take their needs seriously," said Zeller.

To fulfill this mission and to begin building a community of local artists, Zeller has aligned the Studio with highly acclaimed artists to serve as faculty. Instructor Kristin Künc’s latest painting, Owl was featured on the most recent invitation of the Theodore Roosevelt Sanctuary & Audubon Center Gala Ball and was purchased by Nassau County Executive Thomas Suozzi, at the Gala’s auction. Künc graduated from the Pennsylvania Academy of Fine Arts, studied portraiture with Joanette and Cedric Egeli and impressionistic landscape painting at the Cape Cod School of Art. After teaching at the John Waldron Arts Center in Indiana, Künc moved to New York to study with Jacob Collins at the Water Street Atelier. She was awarded a full fellowship to the Vermont Studio Center and the National Society of Arts and Letters' Career Award.

Instructor Bennett Vadnais studied classical drawing and painting at the Bougie Studio, MN, the Water Street Atelier in NY and the Art Students League of New York. He won the highest honors that the League awards, He also taught at the Long Island Academy of Fine Art and has done various landscape workshops around Long Island. Vadnais’ work has exhibited in galleries in New York City and across the country.

Instructor Nan Carey has a BFA in painting from the Rhode Island School of Design. She has been an art instructor at Wave Hill in the Bronx and the Brooklyn Botanic Garden. Her work is exhibited and collected in the metropolitan area and beyond.

The immensely talented North Shore pastel artist Jane McGraw Teubner has won numerous
awards for her pastel paintings in the last few years, most notably from the Salmagundi Club in New York City and the Pastel Society of America.

Internationally renowned artist John Morra, a leading figure in the world of contemporary American realism, will be teaching a Still-Life class. He received his Bachelor of Arts degree in English from Westmont College, Santa Barbara, California, and a Bachelor of Fine Arts in Printmaking from the University of California at Santa Barbara. Graduate study brought Morra to New York, where he received a Master of Fine Arts degree from the New York Academy of Art in 1991. Morra has taught workshops on a regular basis at the Gage Academy in Seattle, Washington, and also the Grand Central Academy in New York City. Morra taught in Provence, France this summer.

To learn more about the Teaching Studio of Art, the faculty and the classes, visit
www.teachingstudios.com or call 917.597.2404.
Posted by InOysterBay at 9:09 AM

Email ThisBlogThis!Share to TwitterShare to FacebookShare to Pinterest
Labels: Teaching Studios of Art