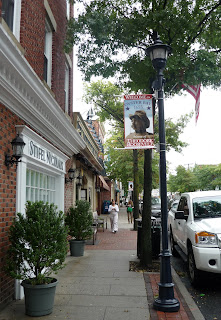 Theodore Roosevelt has returned to Oyster Bay, though this time it is not by horseback or train. TR's face is on 40 new street banners lining Audrey Ave and other major streets downtown.

The photograph of Roosevelt on the banners is taken from around the time he organized and led the First United States Volunteer Cavalry Regiment, better known as the Rough Riders. This regiment was formed after Spain declared war on the United States in 1898 and valiantly served its country in Cuba.

Included with TR's picture is text that reads, "Welcome to Oyster Bay, 1653" and "Home of Theodore Roosevelt, 26th President of the United States." The purpose of the banners is to create a welcoming and inviting feeling for people visiting the downtown.

Roosevelt himself would frequently pass through the downtown area, going from the Oyster Bay Railroad Station to his home at Sagamore Hill about 3 miles away. Roosevelt had offices as Governor and President, first in the Octagon Hotel, then the Oyster Bay Bank Building, and finally in the Moore's Building where the popular Wild Honey restaurant is located today.

According to Jim Bruns, president of the Theodore Roosevelt Association, "TR will always be a part of Oyster Bay's past, present and future. It was his hometown, where he raised his family, where he worshipped and where he wished to be buried. Today, TR's legacy can be seen throughout the hamlet."

Main Street President Bill Sheeline says about the project, "this is a perfect blending together of our interests in history, preservation, and improving the hamlet."

The Oyster Bay Chamber of Commerce and Theodore Roosevelt Association also supported this project. Alex Gallego, President of the Chamber said, "we should celebrate our relationship to TR because this is one thing that makes us different from every other place."

This year also marks the occasion of the 150th anniversary of TR's birth. Among the events to celebrate this milestone will be an old-fashioned hometown parade on Saturday, October 25 at 1pm, starting at the Boys and Girls Club on Pine Hollow Road and ending at the Derby-Hall Bandstand.

Sagamore Hill National Historic Site will have a "Family Festival" on Sunday, October 26, with traditional music and storytelling, children's crafts and activities, demonstrations and exhibits, pony rides, and food vendors. A "Birthday Celebration" on Monday, October 27 from 11am-4pm will feature a flag raising ceremony, the U.S. Navy Band, a commemorative postal station, and birthday cake cutting.

Opportunity to Assist in Beautification

Banners are the latest addition to ongoing efforts meant to beautify and improve the hamlet. This past spring volunteers from several area organizations were involved in a Community Clean Up Day to keep the sidewalks and streets looking clean. Forty hanging flower baskets were soon added to lampposts downtown, bringing beauty and color to Oyster Bay throughout the spring and summer months.

In an effort to keep pace with the season, mums and other fall-appropriate decorations will be added to the downtown in the coming weeks. Then for the holidays the traditional decorations will be supplemented by 30 additional snowflakes added at special locations along Route 106 and leading into town.

Volunteers are welcome to participate in a Community Clean Up on Saturday, October 4 at 9am. A group will gather at the Derby-Hall Bandstand and then disburse to locations throughout the town.

Those who would like to participate in beautification activities in Oyster Bay or who wish to make a contribution are encouraged to contact the Oyster Bay Main Street Association at 516-922-6982 or visit http://www.oysterbaymainstreet.org/ and make an online donation.

Posted by InOysterBay at 2:01 PM